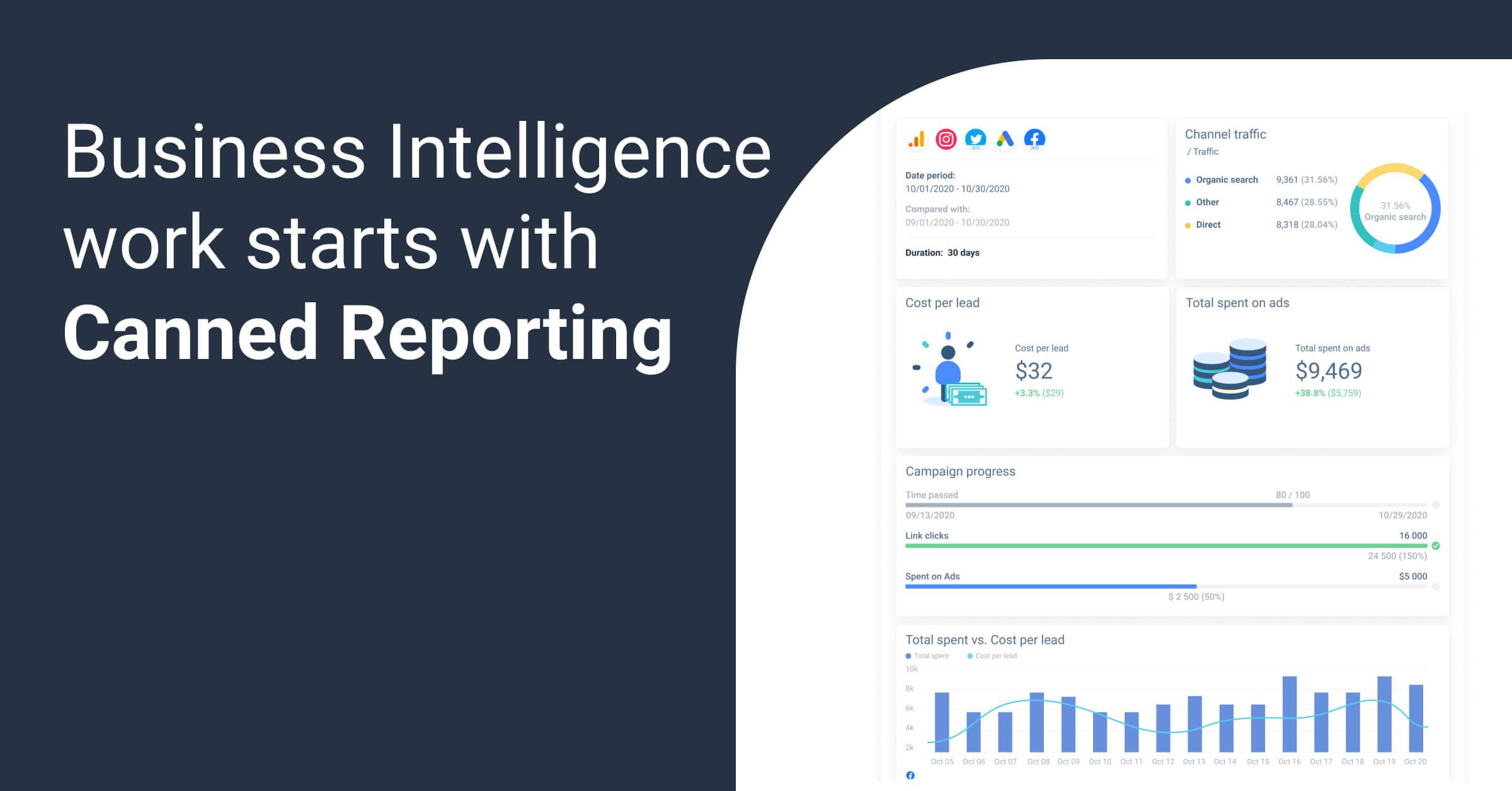 Canned Reports - why it is useful

As companies gradually grow and get funded the number of stakeholders increases. Moreover, there are more decision-makers in the company as it expands, and as we all know having relevant data is the key to accurate decision making. This is why stakeholders and board members usually require reports so that they can get a better insight into the company’s performance, revenue, ongoing costs, etc.

Typically, a presentation of analyzed data where KPIs are neatly visualized is how companies approach this responsibility. These monthly reports are then archived so that anyone who wishes can track the variances.

What Are Canned Reports

Canned reports are a result of data analysis and transformation. These are preformatted reports that have scheduled delivery and are typically distributed throughout the organization to specific groups. The report can be printed and provide visual insights into the performance of different assets or teams.  However, they can be even more insightful if viewed in digital form, in the event the report also has a drill-down capability. This would allow the end-users to inspect different layers of data granularity, and see what data was used in the analysis.

Canned reports can be generated by collecting data from one source or from multiple data sources, which allows a holistic representation of answers to multiple questions across different business departments. This in terms can ensure board members have more confidence when thinking about future business decisions.

Compared to canned reports which are created to be compared over time, ad hoc reports are generated mostly for single use. Moreover, these reports do not require an experienced data scientist, all you need are BI tools that allow casual users to generate a report. Furthermore, these reports do not use such large volumes of data and do not rely on formalized reporting templates. Meaning you can generate them when needed and easily visualize KPIs for target end-users.

So, both of these reports have their pros and cons and as such, they are both used within an enterprise, or in a corporate environment. However, it's undeniable that canned or structure reports carry more weight and are necessary for major business decisions that can even be pivotal in nature. Ad hoc reports mostly represent a snapshot in time, however, they also allow you to do drill-down analysis and examine different variables which makes them extremely useful. If you are trying to implement a certain strategy and monitor its progress, or improve user experience by performing A/B split testing, these ad hoc reports are great tools. Thanks to these quick insights you can create necessary adjustments on the fly and maximize the efficiency of certain business efforts.

Finally, canned reports and ad hoc analysis are used in conjunction even during the process of decision making and in creating reliable business intelligence (BI). For example, a canned report might show that user engagement or sales are either higher or lower than expected. So, to get a better understanding of these results marketing or business analyst will perform ad hoc analysis in order to figure out what happened.

One of the main benefits of relying on canned reports is that it reduces the risk of user errors. It has a defined template or format and as such, it targets specifically assigned data. The whole idea behind data transformation is to make that data compatible with the desired format. In other words, even non-technical users can generate a report by relying on certain software or tool.

One tool you can use for reporting is Whatagraph, as it has everything a modern business needs to generate canned reports. You can integrate the application with different data sources, and create reports for different team members in the company's hierarchy.  It also has great visualization options and there are no heavy IT requirements, so anyone can intuitively figure out how to use the application.

As it stands these canned reports are one of the most efficient ways to process large volumes of data and meet reporting requests. Finally, in a lot of instances, canned reporting is the only option, because end users have a specific set of rules that you must follow. From their point of view, your report must comply with these requirements, and it is why you have to display the information in a form of canned reports.

One shortcoming of canned reports is the potential overgeneralization of data. Considering how you are processing large volumes of information in order to generate a report, you will likely ignore certain variables. This is why using ad hoc analysis can be beneficial for BI. If a canned report shows a drop in cash flow it can be concerning, but an ad hoc report might reveal that the most notable drop occurred over a specific time frame.

Think of a canned report as a tool that shows you outcomes, and think of an ad hoc report as a journey to data discovery, as it reveals what led to those outcomes. You should not use a single reporting solution because the question you are trying to answer tends to be more complex, and requires a deep dive into the matter at hand.

How to Design Canned Reports for End Users

Let's focus on the specifics now and provide an example of a quality report that needs to answer the queries of business users. Let's assume that you need to generate a report that shows the effectiveness of your digital marketing efforts. Your chief of business development will probably want to know the number of new users or customers that the campaigner managed to generate.

So, you will need to include the results of a social media campaign, ad campaign, back-linking campaign, etc.  A good interactive report will allow access to all of these data structures and have answers to each business question your manager might have. So the total number of new users that came as a result of the social media campaign should have the ability to show how many users were acquired through each social network individually.

The same applies to paid ads and backlinks. The data that is displayed needs to be traced back and show which of your advertising options yields the most positive results. This tells which area you should focus on in the future campaign, and what you can eliminate as future costs since it's not as effective. Business users primarily focus on efficiency, and the idea behind regular reports is to allow them to maximize their efforts while minimizing the costs.

To sum up, canned reports are a key factor in BI. The report needs to answer all of the stakeholders' queries and basically tell them if things are going the way it was intended.  It is a way of reporting that needs to follow a specific report template which may require an extensive transformation of business data. The report also often needs to include multiple sources of data which is why a lot of specific information tends to get filtered out in the final report.

In order to get a more detailed overview of a situation and examine inputs that occurred in a specific time frame, you can use ad hoc reporting. This report is a great way to see the impact of isolated instances and then analyze how they impacted the final outcomes. This is why both reporting mechanisms are important for relevant data discovery. 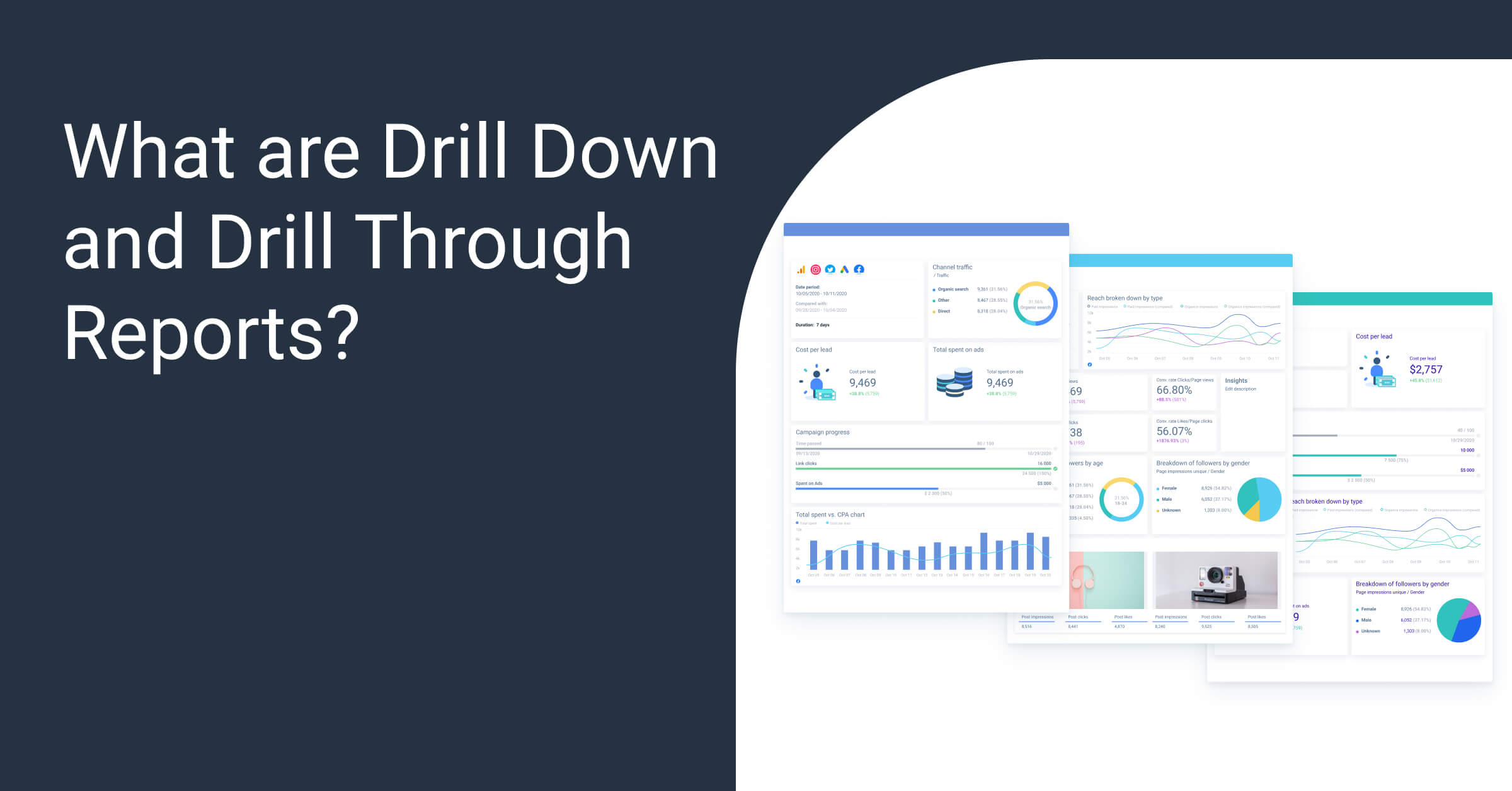 Everything you need to know about the Drilldown Report
Corporate decisions today are largely data-driven, and almost all of the decision-makers in a company rely on quality data analysis to do their job. As we know, we perform filtering, transformation, and analysis using vast amounts of raw data. Based on the analysis we formulate new theories and test them, in order to find new approaches that work better.
Read more... 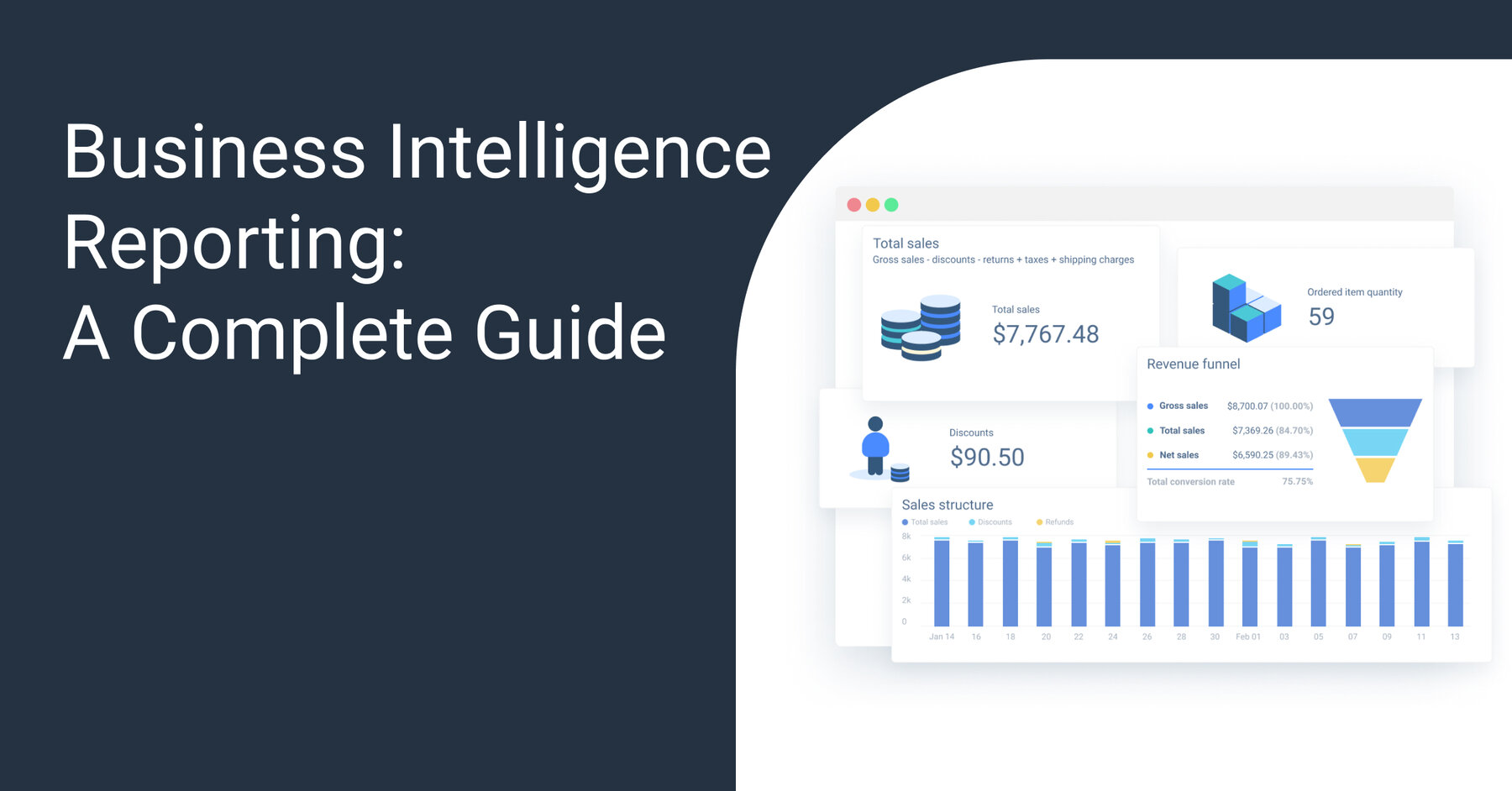 Everything you need to know about BI reporting with the right tools
Focus on the fact that BI sounds complex, but it shouldn't be. It should be plug-and-play because it is crucial for the business decision-making process. And Whatagraph can help here.
Read more...

What is a board report template, and how to write it?
Board meetings are an important event in any company. Many decisions are made regarding the organisation. At the execute level, these decisions have to be based on good information. Yet very few people read board reports, making the entire meeting less productive and information less valuable. Not to mention the fact that business decisions could be made based on incomplete information.
Read more...

By Whatagraph team in Marketing
Mar 30, 2021 ● 5 min read
Join our newsletter mailing list - over 2000 agencies and marketing specialists already have!